A strong faith in God sustained the Swedish immigrants who brought from Sweden their Lutheran church background. In Sweden the state directed the clergy to teach their congregants’ children to read well enough to memorize Luther’s Small Catechism. Religion was a deeply felt need among the immigrants and one of their first concerns after settling was to organize a church congregation. In 1868 the Scandinavian Lutheran Church was organized in Whitehall. Family records show that Anders Johansson (Ryd) was confirmed in Whitehall in 1870. In 1872 Swedish members formed the Swedish Evangelical Lutheran Lebanon Church of Whitehall. A Gothic style church was built using lumber cut from the surrounding woods and milled in a local sawmill. Services were conducted in Swedish until the early 1930’s. Today the neighborhood around the church is still known as Swedentown. In 1877, Carl and Johanna Johnson, grandparents of Chuck Svensson and Eleanor Carlson, donated land on which the church is built. 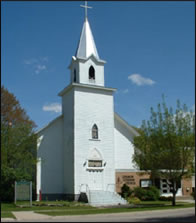 The Building as it looks today

The Swedish Festival was a city-wide event; the Smorgasbord provided by Lebanon. 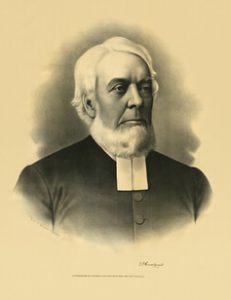 The founding President of the Augustan Synod ( Swedish Lutherans).

Lebanon was given this engraving portrait in 1901. 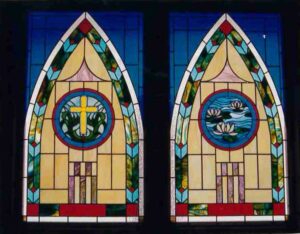 The windows were given in memory of Russell and Do

rothy Johnson. Created by local artist Sharon Brown of Montague, the windows honor all of the women of Lebanon Lutheran who have served, or will serve sometime in the future, the needs of this congregation and the community at large.

Some of our members have also entered the clergy: